If you haven’t heard of the food-fun that is Collaboration Kitchen, you’re missing out! This even was no exception and featured an even larger group of chefs than the last including: Amy Dibaise from Tidal-SD, Alex Carballo from Moto Deli, Augie Saucedo and Erin Campbell from Brother’s Signature Catering, and Jeff Rossman and his sous chef Kenneth Helm from Terra American Bistro. All these chefs came together at Collaboration Kitchen to support Chef Celebration, a non-profit organization that invests in the future of local culinary talent.We also had Kevin Rhodes from Groundswell Brewing on hand with beer pairings for each course. The other great sponsors of the event are Catalina Offshore Products, Specialty Produce, and Camp Chef. 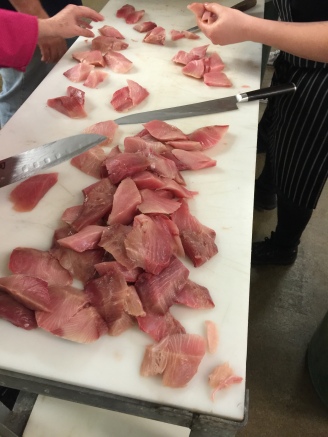 As with all Collaboration Kitchen events, we arrive early with the rest of the volunteers to start prep for the night’s dishes. Our tasks for this event included breaking down a few Hiramasa Yellowtail for one of the latter dishes. It wasn’t nearly as involved of a task as last time at Collaboration Kitchen – Sushi, but still a chance to get hands-on cutting fish. While we were busy with the fish, the other volunteers and chefs were laying out their vegetables and other ingredients to expedite the rest of the dishes.

The first dish of the night belonged to Amy DiBiase of Tidal-SD, a bowl of Venus clams with Salsify puree, purple potato and bacon bits. The clams were steamed in a large pot while the Salsify puree came together with cream and the purple potatoes. Then plating took place, making sure that 3 clams made it onto each plate, topped with puree, cilantro oil, bacon bits, a slice of toasted bread and a garnish of parsley.

The second dish from Alex Carballo from Moto Deli was a BLT sandwich using Opah-bacon, moto-spread, marinated tomatoes, spicy habanero-pickle, and arugula on sourdough bread. While a group was creating the sandwich, the Opah-bacon was getting seared off on the plancha.

Alex gave us a quick demo before going on stage on how to assemble his sandwich. Then a team of us got to work on assembling trays of sandwiches. 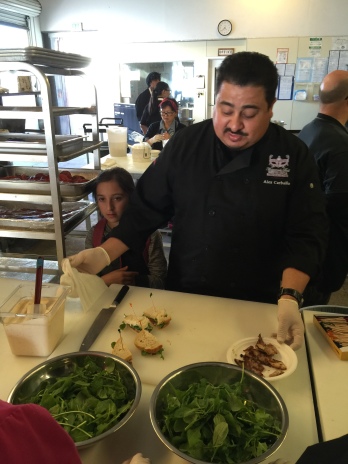 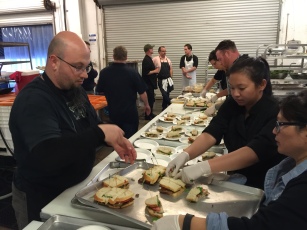 Right before serving, the sandwiches were cut and plated individually.

The next dish was a staple experience of every Collaboration Kitchen, the sashimi demo. Tommy Gomes, the resident Fish Monger, shows everyone how to break down a whole fish, and then gives everyone a chance to try a fresh piece of sashimi. For this event, a whole salmon was broken down and laid out for the crowd to get a bite. 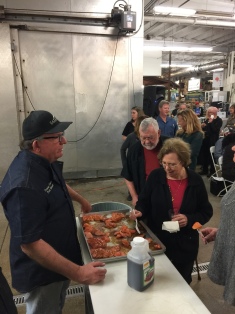 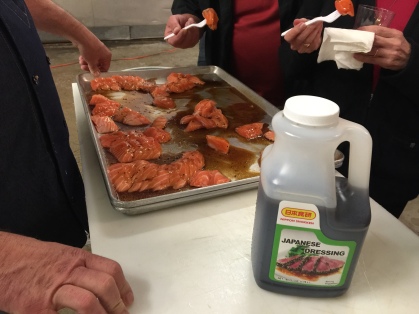 After the sashimi break, it was back to work for us in the back of the house plating. Next up was Augie Saucedo and Erin Campbell from Brother’s Signature Catering. Erin had also been working some fresh pasta dough for her live demo while we were plating.

The dish was an English Pea Tortellini with Lardons, tri-colored Radishes, Seville Oranges, and an Uni-Veloute. Plating consisted of laying down the sauce base, putting 3 Tortellini in each bowl, then topping with the Lardons, Radishes, a few fresh peas, and Uni. For the finishing touch there were a few edible flowers.

The last two dishes of the night were prepared by Jeff Rossman and his sous chef Kenneth Helm from Terra American Bistro. The first of those dishes was an Opah-Pastrami with Kewpie mayo, Midori Sriracha, and pickled Brussels Sprouts on a bed of grilled Radicchio.

The prep work on this dish consisted of cutting all of the Brussels sprouts in half and portioning out the Opah. For plating it was laying down the Radiccio, and gently topping with fish, Brussels, and the sauce garnishes. 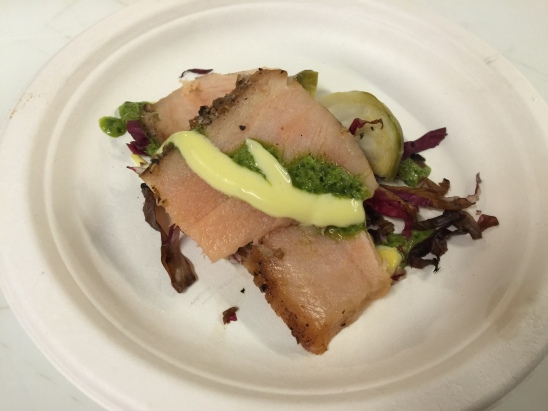 The last dish of the night was a Dukkah (Mediterranean Hazelnut spice mix)-crusted Hiramasa with a Gobo puree, Thumbelina Carrots, Easter-Egg Radishes and Buerre noisette (brown butter). Before the live-demo, each piece of Hiramasa was coated with the Dukkah and then seared off on a Plancha. The Carrots and Radishes were roasted ahead of time, and portioned out on sheet pans, that were heated up before serving.

To plate this dish, we laid down a spoonful of the Gobo-puree, then added a few Carrots and Radishes next to it. Each plate then got a piece of the Hirmasa before being topped with Buerre noisette.

After the last dish, Chef Celebrations was presented with the money raised for the night which will go towards sending promising young chefs to culinary school. Then the chefs and volunteers gathered at the front to close out the event. This was a fast-paced, fun and exciting event! We were so fortunate to be part of the amazing team of volunteers behind the scenes that makes this event run so smoothly. If you want to read more about what goes on behind the scenes at Collaboration Kitchen you can read about it at Collaboration Kitchen – Behind the Scenes.