We met Anthony Pascale of Saiko Sushi back at Collaboration Kitchen – Sushi and knew his restaurant would be a great one to check out. The drive over to Saiko Sushi in Coronado was beautiful, going over the Coronado bridge gives spectacular views of the downtown skyline and San Diego Harbor. When we arrived Anthony was waiting for us, and we sat down by him at the end of the sushi bar to begin our adventure. 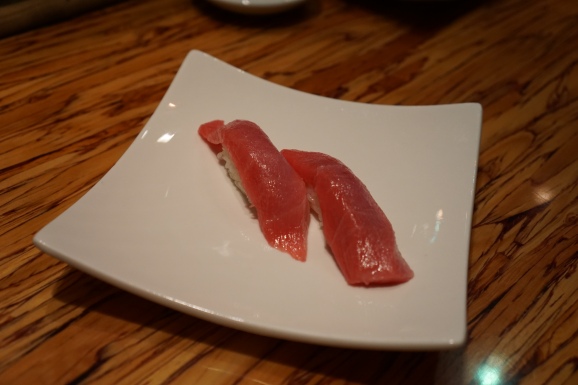 The first thing Anthony will tell you about his sushi is where and how he selects his fish. The fish almost excusively comes from Catalina Offshore Products, most of which is caught by local fishermen. Sustainible fishing and quality farming practices are things to look for when choosing your fish. Not all farmed fish is bad, some practices, such as the Mt. Cook apline Salmon from New Zealand is incredible! The fish is raised in flowing water at the top of mountain which produces healthy and buttery tasting Salmon, and among some of the most delishious we’ve ever tasted. Our first course was a Bluefin Tuna Nigiri from Spain that’s wild caught as a young fish, then raised in ocean pens until they are large enough.

The next course was a local-caught Bigeye Tuna Nigiri marinated in in a soy and sake mixture with Yuzukosho, a peppery mixture of Yuzu (a Japanese citrus) zest and chili peppers.

Our next courses were two Salmon Nigiri dishes. The first was the New Zealand salmon topped with white soy. The second was a Scottish salmon that had been house smoked with Sugar Maple and topped with Miso-Mustard and Hawaiian salt. The smoked salmon is made daily using a $99 smoker from Target. In order to not cook the fish, the smoke is passed through ice while it’s smoked for 30 minutes. An interesting byproduct of this cold-smoking is the smoked ice cubes at the end. Anothony suggested using them in one of their many fine Whiskies. 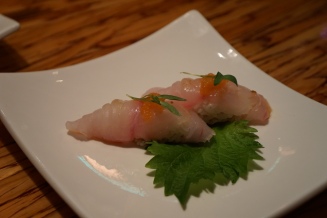 Next was a Nigiri of Halibut fin muscle with Yuzu and shrimp salt. The Halibut fin can be a little tougher than most fish, so it was scored and then lightly seared with a torch. Then we had a Nigiri of Pink Grouper with a Jalepeño ponzu and kimchi daikon radish. The kimchi got us talking about fermenting at home, and what you can do with the leftover liquid. Anthony brought out a little kimchi to try on its own, and it was a great balance of spicy and tangy. The liquid from the kimchi can be frozen into a granita and then used to top oysters or other cold seafood.

The next course was an Octopus Nigiri. This was no ordinary octopus, Anthony gets his Octopus fresh and marinates it in Daikon and Yuzu. The Daikon enzymes help tenderize the Octopus before it’s cooked by boiling with Star Anise and other spices. The last Nigiri dish of the night was a Calle de Ocho Scallop. This simple scallop has a nice firm texture and clean flavor.

We were then treated to beautiful local Uni. If you’ve never tried fresh Uni, you’re missing out! These Sea Urchins are locally caught here in San Diego, and kept alive in coolers until it’s time to serve them. Anthony masterfully showed us how he cracks the shells and scoops the delicate roe from the inside. The roe gets cleaned in an ice bath before plating in the empty shell. Sometimes you can still see the Urchin moving when it’s served.

Our last main dish was Anthony’s riff on Filipino Adobo with Salmon and coconut cream and charred Fricassee lettuce. By this time we were very full from all the delicious sushi, so it was a good time to find out a bit more about Saiko Sushi’s origins while we waited for dessert. The Coronado location of Saiko Sushi opened 3 years ago, their newer North Park location only one year ago. Before becoming a sushi chef, Anthony was a Wall Street trader. Looking for something completely different, he made his way out to Park City, Utah where he met a local sushi bar owner, and began his career as a sushi chef. Both Saiko locations have the same extensive sushi menu featuring local and sustainable fish. The North Park location is one of the few places you can learn and drink Sake from certified Sake Professionals.

Lastly, for dessert we had a combination of Sesame Cheesecake and Uni-sauce Ice Cream. The sweet-soy base of Uni-sauce was a delicious and refreshing compliment to the rich Cheesecake. Saiko Sushi is one of the few places in San Diego where you will find chefs so knowledgeable about the fish they are serving. This knowledge and care, translates into some incredible food where each ingredient is allowed to shine on every dish. We can’t wait to come back and see what chef Anthony has in store next time!